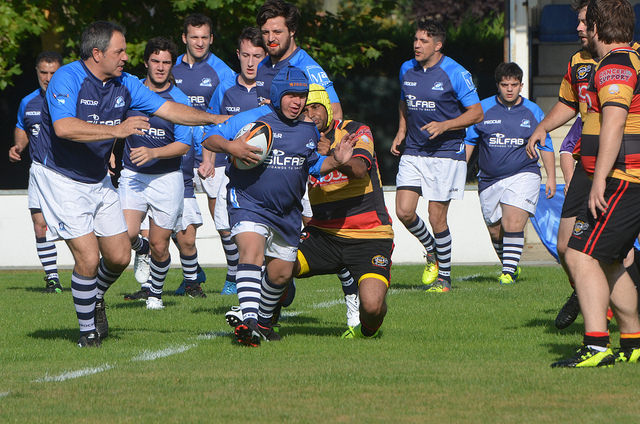 England Rugby and Sport Relief have announced that Bradford based International Mixed Ability Sports (IMAS) are one of six latest projects to be awarded Try for Change grants.

Aimed at supporting charities, community groups and grassroots rugby clubs in England, the grants offer projects support for work delivered over two to three years to improve lives through rugby.

IMAS recognised the power of rugby and its core values as a tool to greatly improve and support the lives of marginalised and disadvantaged people, and since 2014 the not for profit organisation has been assisting clubs across England in the drive to become more inclusive.

The Comic Relief grant will allow IMAS to introduce mixed ability rugby to 20 rugby clubs in Yorkshire and the Midlands. Mixed Ability Rugby sees players with and without disabilities play full-contact rugby together. This enables previously excluded participants to become equal team members without being separated, classified or labelled. Wider social benefits as a result of the programme include increased social integration and diversity awareness, as well as changing perceptions within clubs and communities.

“It’s great to see a range of projects being awarded grants at our second round of funding,» said Dominic Proctor, RFU Chair of Try for Change and RFU Board.

«IMAS has shown significant commitment to improving lives through rugby over a sustained period. We look forward to seeing how they develop their plans and the impact they will have over the next few years to leave a lasting impact in local communities across the country.”

Mark Goodwin IMAS Director said “Bradford has been a cradle for the growth of Mixed Ability Rugby, being the home of England’s first Mixed Ability team the Bumbles Bees RFC, and hosting the first ever International Mixed Ability  Rugby Tournament in 2015”

“Although we are also working with several National Governing Bodies across Europe to move away from segregated activities and towards inclusive rugby, we long ago decided that Bradford will remain our physical and spiritual home.”

IMAS is also the strategic partner in the Erasmus+ Sport Mixed Ability – Rugby for All (MIXAR) project funded by the European Commission which sees the Italian, Spanish and Flemish rugby unions trialling the model. The project aims to replicate the English success in creating Mixed Ability teams within established mainstream rugby clubs, opening the game to participants who face a wide range of barriers, reengaging and retaining former and new rugby players and raising awareness around equality and inclusion. Other partners include the University of Salamanca (Spain), Per Formare (Italy) and the Irish Club Sundays Well Rebels.