International Mixed Ability Sports (IMAS) have been leading the national roll out of Mixed Ability Rugby since 2014, employing players with learning disabilities and autism to introduce and educate grassroots clubs on the benefits of the game. The Comic Relief ‘Try for Change’ programme has recently seen IMAS deliver presentations to referee groups across England.
It was in the Midlands where the Chair of North Midlands Society of Rugby Football Referees Kelvin Roberts first recognised an opportunity to include disabled people in their off-pitch activities. Kelvin explained:

‘We cover an area that includes Shropshire, Greater Birmingham, Worcestershire and Herefordshire. Although we never have enough referees our particular need is to significantly increase the number of those who stand on the touchline assessing our refs. In an ideal world we would be looking for people who have a love of the game, including ex-players, we can offer training which will support that basic knowledge.
When I saw the IMAS presentation and heard the personal achievements of disabled players I recognised that we could take this a step further and include people who might never be able to play full contact rugby but who could offer vital input to the game management.’

In order to succeed as a referee assessor Kelvin detailed the required attributes:
1. An interest in rugby union is vital. Obviously, the more knowledge an individual has the better, but that knowledge can come from being a supporter at a club or even watching the game on television. Playing is not a prerequisite!

2. Being able to communicate effectively. All assessors are asked to discuss the game with the referee afterwards and offer suggestions as to how they can improve.

3. Note taking is usually required but there is absolutely no reason why the notes cannot be recorded on a Dictaphone to aid discussion later. There is normally a requirement to complete an RFU report, but the North Midland Society can be very flexible regarding this and ensure reasonable adjustments are made.

4. Being able to get to the venue is key as unfortunately transport assistance isn’t available. However, the society are mindful of where people live and try to make the games as close to home as possible. If someone uses an aid for getting about then the society will aim to appoint them to grounds that support such needs.

5. Training will be given. Usually this will include a mentor to shadow the new assessor and at some stage a course will be run, these are only run once a year as they rely heavily on the mentors.

6. There is a good spread of games at a variety of levels in the North Midlands region, so everybody starts at lower skill level games.

7. Saturday is the biggest day for matches, but there are a lot of games on most Sundays and quite a few mid-week games so there is certainly not a day restriction.

If you’re interested in getting involved or have any questions about the practicalities of being an assessor, you can contact Kelvin via chair@northmidsrefs.co.uk

Thanks to Mick Massey Photography 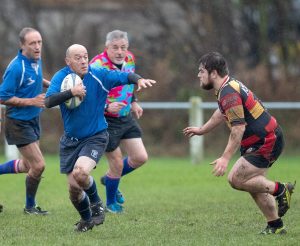