“This past month Harriet and I have been on placement with International Mixed Ability Sport (IMAS). We are 3rd year medical students from the university of Sheffield.
The aim of this attachment was to gain an understanding of how healthcare and social programmes can work outside of a hospital or a GP setting, as well as to gain some experience in the community.

The placement began with Harriet attending a presentation at Barnsley FC. IMAS was delivering a presentation to local sports clubs to outline Mixed Ability (MA) model of inclusion in grass roots sports. While we were with IMAS we also travelled to Market Rasen and Louth RUFC to deliver a similar presentation to the club to urge them to develop a MA team. The club has since gotten back to IMAS and has said that they will now set up their own MA team.

One of the first things we did with IMAS was to get involved in MA sport. We participated in MA wheelchair Kin-ball at a school in Huddersfield. Children ages 7-13 with various disabilities were mixed in with students without disabilities and they were all given wheelchairs to level the playing field. They played different games to warm up like tag or chase the ball. Then they started to play the team sport. It was incredible to see the teamwork in a MA team. Those who had more wheelchair experience were giving the rest of the group, including myself, tips and tutorials on how to use the wheelchair. In return the more able students were continuously supporting and encouraging those with reduced ability. It was remarkable to see the level of support and empathy that was offered from the young students towards their peers.

We were involved in the weekly IMAS classes, where there was a sense of community and belonging. I think this is vital for everyone because it has such an impact on their lives and provided a space where they can share opportunities and experiences. For example, two members from the class attended a course at a local University and gained a qualification on leading visually impaired people on walks. A small group went to Manchester United to present the MA model. We held interviews with some of the attendees to find out the impact IMAS has had on them. It was clear that it had a large impact on their mental, physical and social health.

By being part of IMAS, we had an opportunity to mix with people with different disabilities and speak to them about their lives. From this we learned more about various determinants of health, particularly learning disabilities. Having a learning disability is associated with reduced life expectancy. It is hoped that being involved in a community project like IMAS, will help improve determinants  of health by promoting a healthy and active lifestyle. However, I realised there were more benefits for people to be involved in a project like this other than diet and exercise. Being part of that club offered an excellent support network. To some of them it was their only support network. Being part of a social group will have a massive effect on their mental health, which ultimately affects their quality of life and their perspective of their conditions.

Many of the attendees at the IMAS class have learning disabilities, physical disabilities and various other medical conditions. Speaking to the members of the club allowed me to have a further understanding of the complexity of having such co-morbidities. It offered a valuable learning opportunity as it showed how community programs such as IMAS could have a life changing effect on patients; highlighting the importance of using conservative treatments to improve a patient’s condition as well as their quality of life.

We also had an opportunity to see how IMAS worked with on a large scale to try to implement a systemic change in legislation in terms of mixed ability. We headed down to Loughborough to attend the Activity Alliance meeting with sport’s national governing bodies, where we shared ideas and projects with other members of sports committees or boards to try and better improve disability in sport and access to grass roots community sports.

We attended an NHS meeting where IMAS shared lessons from MA sport applicable to healthcare. We aided in accessing the venue for a MA taster session and helping decide on activities to be run.
We had the opportunity to engage with the Super 1’s and Wicketz cricket programs bringing together disabled children and children from deprived backgrounds. There was teaching from IMAS to young people to help break down barriers of disability in sport. Then also giving them that opportunity to experience it themselves by integrating children from the local cricket club with the children from the MA club. The games were played as normal and the children got a chance to see that disability shouldn’t be a barrier to sport. This was followed by a very inspirational presentation by Charlie Fogarty, where he shared his motivating story, telling them that they can achieve anything they can set themselves to.

We joined one of the members of the class in a MA rowing session. It was excellent to see that the club treated its MA members the same as everyone else, giving them responsibilities in setting up and the maintenance of the boat and the club just like any other member would have to. I felt that giving the MA members responsibilities and duties in the club can really empower them. I believe that this can drive them to be more empowered and more in control of their health conditions.

I had never previously interacted with people with learning (and other) disabilities. I now feel much more equipped to communicate and treat such patients. I have also gained a much deeper understanding of the value of social prescribing and community-based projects on patients’ quality of life. I believe that being on this placement and the knowledge and experience I gained at IMAS will help me make a better doctor in the future. Taking a more holistic approach to patients and being more inclined to signpost them to projects like this.” 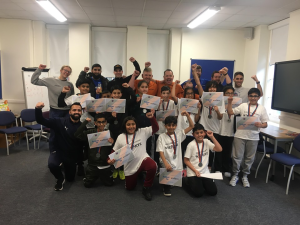 With the Wicketz and Super 1’s cricketers