Raising the curtain on the IMAS Manifesto 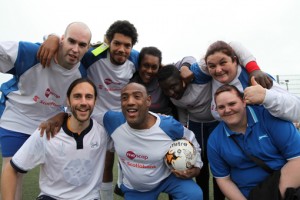 Mencap and Golden Lane Housing (GHL) are organising their 2nd mixed ability football festival and fun day at Keepmoat Football Stadium in Doncaster following the hugely successful inaugural games in 2016. The event on Saturday 22nd July will be held at the Keepmoat Stadium in Doncaster and is billed as a fun day with the opportunity for spectators to try out other Mixed Ability Sports as well as sample food and drinks from the various stalls on site.

Joe Boyd of GHL said “We met with one of the founders of Bumbles Rugby Club and Director of IMAS for a little inspiration and things moved forward from there. Last year was a massive success for everyone involved. Sixteen teams from Yorkshire, Nottingham, London and a few places in between took part. The Whippets were unfortunately narrowly knocked out in the group stages whilst the Flatcaps made it a little further to the quarter finals. Every one of our players played lots of football, had lots of fun and most scored a few goals. A few players even upped their games for the big stage – David of the Flatcaps, my player of the tournament netting an impressive four goals in four games. I couldn’t have been more proud in every one of them. The main topic of conversation before the coach home was when would we be playing again.

The next goal is to build on the achievement of the tournaments, find more opposition and travel to play organised games more often. If we and other teams continue to raise awareness of mixed ability sports then maybe even a mixed-ability league one day in the near future.”